Increasing Dimension Capacity in 2020 Pays Off in 2021

How We Got Here

[September 1, 2021] “When Bright Wood first started manufacturing Engineered Dimension lumber in 2016, industry people asked me, Why did you get into fingerjoint (FJ) dimension? You don’t know anything about it,” Dallas Stovall (CEO/President) said. “My response was, We are not rookies; we have people who have the experience such as Tim Stovall, Adam Brown, Luis Islas, Jesus Cohetzaltitla, Walt Williams, and others.”

“We built our second line in 2017 in the freshly remodeled Plant 15,” Dallas said. “Here we could fingerjoint 11’ lumber into 40’ outbound lumber with no trimming for shorter lengths after the press. The 40’ length added more sales options beyond the 28’ press at 1201.”

“When the pandemic started in early 2020, the owners of Mid-Columbia Lumber handed us a gift,” Dallas said. “If we would take over their Madras site’s building lease, they would throw in their fingerjointer (which became Plant 16). This is also a 40’ line, but it is unique because it has the ability to cut solid stud lengths off the end of the inbound lumber. The remaining lumber is fingerjointed separately from the studs.”

“Mid-Columbia put their Culver plant up for sale in late 2020,” Dallas said. “We negotiated a very good deal which included 22 acres, a nice building, and two different fingerjoint lines. One line is focused on fingerjoint studs with the goal of at least three fingerjoints per board. The second line can press 12’ long inbound into 60’ lengths. Both of these machine centers are working one shift.”

“A new planer to surface rough lumber at the Culver site should be operational by late September,” Dallas said. “We’ll be installing a Stetson Ross planer we’ve shipped back from our closed sawmill in New Zealand. Then we want to add a scanner and three Ultimizer cross-cut saws to cut lower grades and pull blocks out to make studs. These will probably be operational by early 2022.”

“To differentiate our fingerjoint dimension from the competition, we’ve named ours Engineered Dimension with the promise of being Longer, Stronger, and Straighter,” Dallas said. “And that is how the Straight! Outta Bright Wood legend started.”

“Saying that the timing was good to purchase Plant 16 and the Culver site is quite the understatement,” Scott Hill, Engineered Dimension Sales, said. Both footage and sales dollars have increased substantially thanks to the added capacity.

“Engineered Dimension footage shipped was up 112% from January to June 2021 compared to the same period in 2020,” Scott said. “Some of the increase is attributable to better efficiencies in Plant 15, but the majority is from the addition of the long line in Plant 16 and the long and stud lines in Culver.”

“Meanwhile, Engineered Dimension sales dollars were up 376% from January to June 2021 compared to the same period in 2020,” Scott said. “A share of that came from increased volume, but a more than tripling of prices from June 2020 to June 2021 added much of this. This 12-month period has seen a run in dimension lumber prices that shattered all previous records.”

“This rapid increase in dimension business has come with some very real growing pains, but overall everyone involved with the program has done an outstanding job of stepping up, and our customers have been very happy with us,” Scott said. “The addition of Christy Hollenback to Engineered Dimension Sales in November has been a lifesaver.”

Christy sold long lengths and studs for Mid Columbia for seven years, so she knows the product and the market. “Adding Plant 16 and the Culver site expanded Bright Wood’s ability to take on more orders in the marketplace for sure,” she said. “Culver has a stud line and a long length line so we are able to take advantage of the strong market and sell a lot of wood when the market and prices were going up. That was a big advantage.”

“The market started a deep dive in June and has yet to cease its downturn,” Christy said. “We saw unprecedented highs this year, but we are now in the midst of a historic slide. Today an oversupplied market has pushed prices back down. Bright Wood has not been forced to drop pricing, as other manufactures have. Instead, we rode out our order file and then shifted our workforce to the busy window lines.”

“We hope to find the market bottom soon and start selling dimension again,” Christy said. “Bright Wood’s product is very well received in the marketplace and I always hear positive feedback on the quality. Bright Wood has a good name out there.” 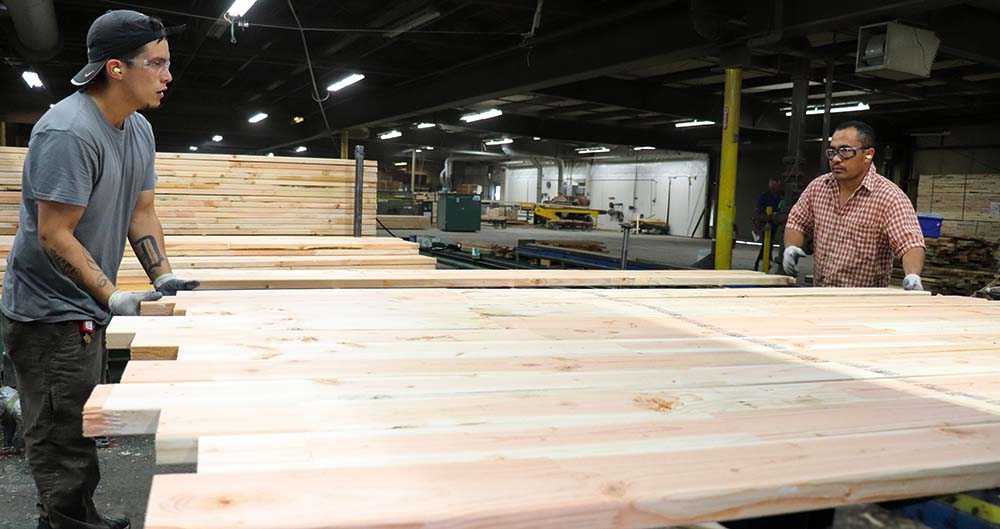